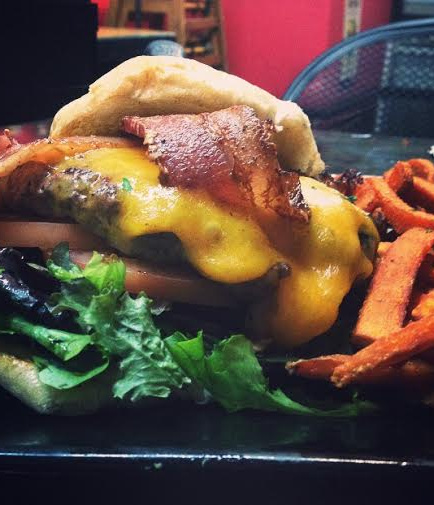 This is a tale of my eating disorder recovery, culminating in me eating a huge, juicy cheeseburger tonight that was maybe the best thing in the world. Ready?

This year, I’ve been called disgusting, fat, a hypocrite, a murderer, a disgrace to veganism and humankind, and an idiot who doesn’t know what she’s talking about.

And do you know why that is? Because I’ve chosen that for my body, at this point in time, it’s best to eat meat. I have moved away from the vegan label and any dietary label in general (for all of time, that’s for damn sure! #labelfree), and even though it’s been hard it has been exceptionally worth it.

Dietary labels are rooted in something seemingly good. They are, more or less, rooted in health. We start by wanting to be healthier, so we decide to learn more about a specific diet/lifestyle like vegan, raw, paleo, pescetarian, lacto-ovo-vegetarian, macrobiotic, gluten-free, sugar-free, 80/10/10, dairy-free, raw till 4, vegan before 6, etc.

Trust me, I’ve tried all of the above. Several times. So many times I couldn’t even begin to count. Add 30 days of juicing to that list and the “juicing till 4” with steamed veggies for dinner and you have my late adolescence and early adulthood covered.

For some of us, it’s easy for those dietary labels to become a slippery slope into the more extreme. Veganism turns to raw turns to juicing addiction turns to food fears turns to orthorexia turns to a form of anorexia and intense avoidance of everything from natural sugar to nightshade vegetables.

Even thinking about how much of a slave I was to food (and lack thereof) this time last year makes me shudder. Even this time six months ago. Yes, I’ve come a long way. Yes, I’m writing a book about it. Yes, I’ve ditched the labels. But that doesn’t mean it’s been easy. It’s actually been very, very, very hard.

Food still freaks me out on a daily basis. It doesn’t help that I have a severely sensitive stomach, stomach ulcers and food intolerances that lead me into food fears and dietary labels in the first place. But regardless, my journey out of orthorexia and moving away from veganism has been an uphill battle.

I still avoid many things, mainly because of my sensitive stomach, from wheat to sugar to alcohol. That’s not to say I don’t indulge from time to time or even go (way) overboard when I feel like it. My sensitivities don’t make moderation any easier, but my dedication to balance certainly helps put things into perspective for me.

Sometimes I get so overwhelmed with trying to get my food situation back on track I feel like I would rather give up and slip back into a) orthorexia and food fears or b) just eat whatever the heck I want and accept that I will feel like crap about it.

But realistically I know that’s not worth it and it’s not what I want. What I want is to feel great so that I can enjoy every aspect of my life as much as I deserve to. I love to exercise and be active, I love to spend time with my friends and family and go on fun adventures with them, and I love to write and blog and vlog and connect with all of you.

I can’t do any of that when I’m not feeling well. That’s what keeps me motivated every day to challenge myself, to try new things, to go to new doctors and acupuncturists and colonic hydrotherapists and psychiatrists and nutritionists and gastroenterologists and to remain as open as humanly possible about where I am with all of this.

I went into 2014 with a severe eating disorder and an addiction to juicing. I was afraid of everything that was not kale, steamed broccoli or green juice with no fruit in it. Now it’s nearly 2015 (what?!) and I know I have come so far.

I took myself on a burger date tonight. Yes, took myself. Me, myself and I. I am still getting there when it comes to eating certain foods around other people, not because I don’t want them to know about it (clearly if that were the case I wouldn’t be writing about it for the world to read) but because when other people are with me I just can’t bring myself to try new things the way I can when I’m alone. I second guess myself and decide to get something in my comfort zone… Like a plain salad with no dressing that I will likely eat a bite or two of. (Told you I still have a long way to go.)

Regardless, I took myself on a burger date tonight. To a place in Sacramento that is known for the best burgers. They are hormone-free and the buns are homemade, but other than that the place is certainly not known for healthiness. And that’s what I need sometimes… To get out of my comfort zone and prove to myself that food doesn’t rule me.

I had a burger and sweet potato fries, and I stopped eating when I was full. An actual phenomenon for me, after seriously disconnecting from my hunger cues for so long and having no idea what fullness versus hunger felt like.

Since I was alone, and I am quite extroverted, I ended up in a pretty deep conversation with my server who was also the manager. He asked if I had been there before and I said no. I told him that I only started eating meat again a few months ago, and I told him all about how I was vegan and so attached to the vegan label.

He knew a lot about veganism and was intrigued by the transition. After a rather in depth convo he hugged me and congratulated me on my change, and I don’t know exactly why but I got a huge lump in my throat. I was so touched that he was moved by my story, and it felt so good to bond with someone in a situation I would never, ever have been in even just a few months ago.

Then I straight up cried in the car on the way home because life is so precious and the fact that food inhibited me from fully enjoying it for so long bums me out — but I mainly cried because life IS so precious and I feel lucky to be a part of it, getting better and doing what I love.

Even if I had “indulged” in a veggie burger throughout my eating disorder I would have ran to the gym to burn it off and then some. Tonight I had the urge to go to the gym after eating, but instead I came home and wrote this post, lit my fav candles and took a bath. I’ll do yoga later and go on a run in the morning… Because I WANT to and for no other reason. I will not be a slave to food, exercise or body image any longer. I’m stronger than that.

As always, I’m here. I love you all and thank you for sticking with me.