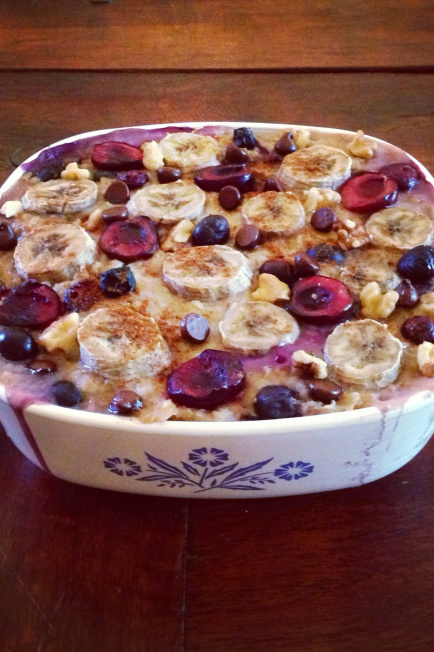 OK, so there are too many delicious ingredients in this to even come up with a name for it other than Baked Oatmeal Heaven. Unless you’re a fan of names like “Blueberry-Banana-Raisin-Cherry-Walnut-Cinnamon Chocolate-Chip Baked Oatmeal Heaven,” which I usually am, but I decided to give your eyes a break on this one and keep it short and simple. Because it’s baked oatmeal. And it’s heaven.

I came up with the idea for baked oatmeal after perusing some of my favorite vegan food blogs a while back, and have been dying to try it ever since. Problem is, I usually wake up too hungry to wait for my oats to boil AND to bake, so I usually opt for my usual Jar of Yumminess instead (even though the blending and decorating probably takes just as long as baking in itself).

The coolest thing about this recipe is that it has been a huge hit with my non-vegan friends and family. My mom was all googly-eyed when I was making it, which she basically never is about vegan food, and we split the first batch I made and we were both basically singing in praise because it was so damn good. The baked berries and cherries add a SERIOUS flavor that is reminiscent of berry pies and cobblers over the holidays, and the baked bananas are soft and gooey in taste and in texture. The raisins add a nice sugary touch that compliments the other flavors well, and the walnuts give it a good crunch. And the chocolate chips add obvious perfection for reasons I do not need to state (it’s chocolate…hello).

I have to say: I can’t mask my excitement that those around me enjoyed this so much. I can make vegan food that vegans like until I’m blue in the face, but when non-vegans genuinely enjoy my food I know I’m capturing flavors in just the right way, and I know I’m that much closer to helping people make healthier choices and find the nourishing substitutes that work for them.

Let’s just say I will be making this recipe again and again and AGAIN, and I have officially gotten over my fear of waiting for my oats to bake. (Plus, if you get too hungry while you wait, sip on a mini-green smoothie. It’s the perfect way to keep yourself occupied and satisfy a little bit of that hunger).

Serves 3 (Or 1 person who goes back to the fridge throughout the day for more and more. Whoops.)