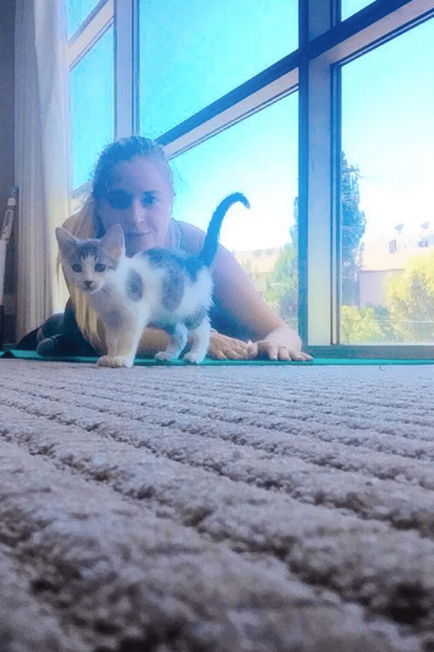 Hi guys. 🙂 I know I’ve been MIA for several days but I promise it’s been for a good reason. Last Tuesday I became a MOM!!!! A kitten mom, that is. You may have seen that Hudson already has his own Instagram account, and was reposted by a huge kitty account today where his photo received a grand total of 16,000+ likes & counting, which is about 13,000 more than his long-time blogging mama has EVER gotten. 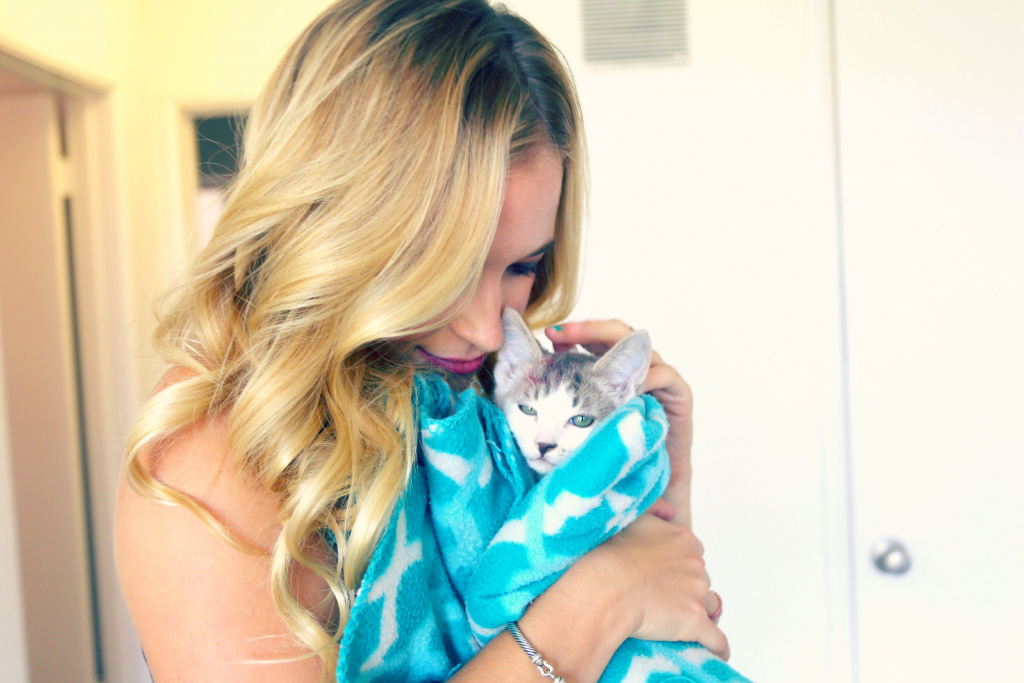 And for those of you who know me personally, you know I’ve never in my life had a pet. I had lots of fish when I was really young, but after I stepped on a gold fish in a pet store and it crunched under my shoe (true story), the novelty of fish was ruined and I stopped getting fishies. So between the years of 1999 – 2015, I had a grand total of zero pets.

I begged my parents for years and years and yeeears to get a puppy or a kitten for us, but it was never going to happen. My parents are not animal people at all and they are also OCD about our house and its cleanliness, and nothing quite gives my dad more anxiety than the thought of a fur baby running around our house and potentially making a mess. (He has a hard enough time with children and people in general being in our house, lol… I’m telling you: OCD!!!)

I got used to never having a pet, and as a result I kind of dropped the topic of getting an animal for many, many years. I really liked my friends’ animals, and there have been a few animals that I have developed major bonds with over the years, but I was SO intimidated by the amount of work that would go into having a pet I imagined I wouldn’t get one until maybe I was married– that way at least one person in the house would (most likely) be used to taking care of a pet and the pet would have a chance at a super normal life! (Lol. I’m serious. I had zero confidence in my ability to be a pet mama on my own.)

Then about a year and a half ago I started getting major urges to get a pet, despite the commitment I knew it would be. I longed for the companionship, the responsibility, the cuddliness, the happiness a little animal would bring, a buddy to hang out at home with me since I work from home, and a little baby to be responsible for taking care of. I also wanted something that would bind me to being home more– I’m notoriously all over the place, and having a pet is like having a little family. I guess you could say after years of being on my own and pretty wild and travel-obsessed and spur of the moment and adventurous (well, that’s not going to change) I knew I was ready for a big commitment to “settling down” — even just a little bit! 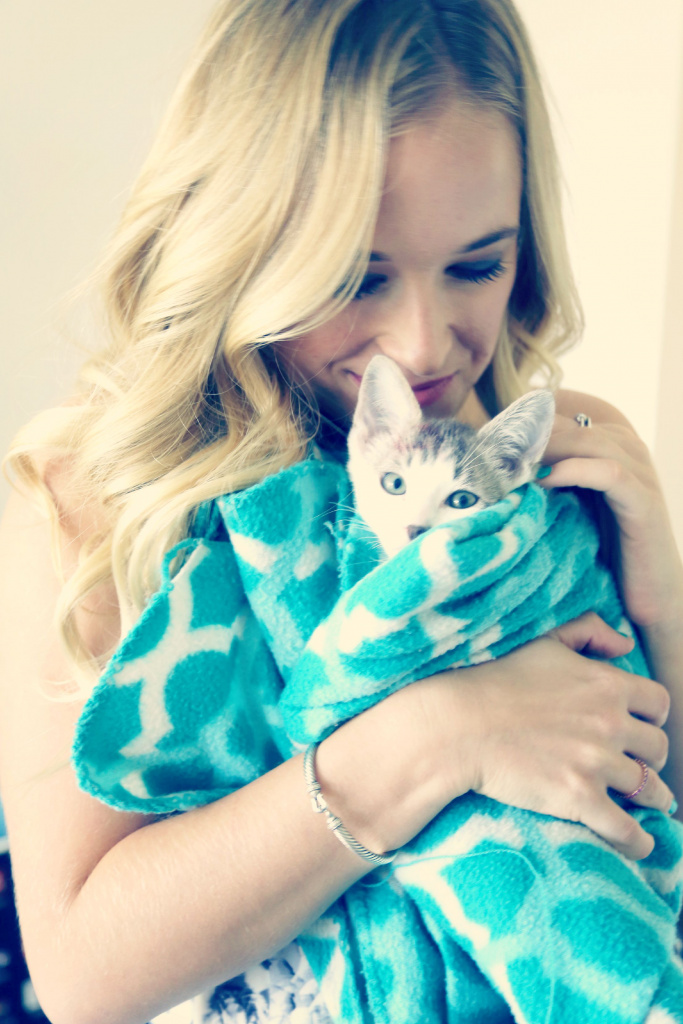 I’ve been obsessing over the idea for a while now– to the point where drunkenly on my last birthday after an afternoon of day-drinking I almost adopted a dog at an adoption stand in Santa Monica. Luckily some of my friends talked me out of it because drunk decisions are never the best serious decisions…. #oops.

And THEN all signs in my life started pointing toward me getting a cat. I spoke with someone from India who does energy work and reads birth charts, and he told me that the animal I needed to have around me in order for me to thrive to my full potential was a female cat. At first I was surprised. A cat? I had never been particularly drawn to cats. But after he said it I started thinking… Wait a sec, getting a kitten might be the best freaking thing in the entire world.

It was still just fantasy, because at that point I had a whole summer of travel ahead of me. And thank god I did, because I am known to make very impulsive decisions far too soon. So I had all summer to think about it, and while I did– cat signs popped up everywhere. I moved into an apartment where cats were allowed but not dogs, I fell in love with a friend’s kitten, I went through a few life changes that left me yearning for a little animal to take care of more than ever, and I just started feeling more and more ready to commit to a little baby kitten. 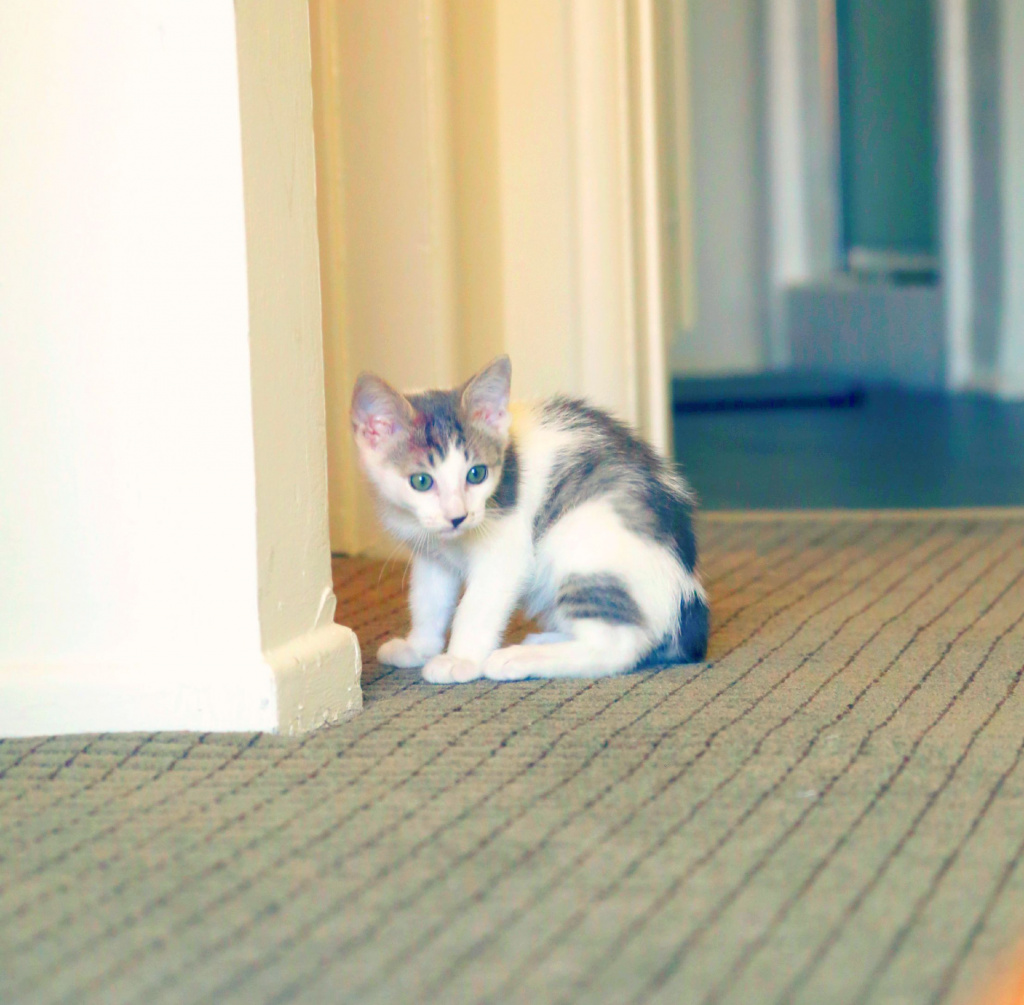 Checking out his new digs on his second day at home!

And THEN after months and months of travel, I started feeling like okay I need to be in LA more, how do I go about doing that? I signed up for the LA Marathon, which officially binds me to be here every weekend to practice with my team until February, and then getting a kitten and being around more seemed to make more and more sense.

So last week, in typical Jordan fashion, the intense desire to adopt a kitten that very day came over me. I ditched my work for the day, drove all over LA checking out adoption centers, talking on the phone with organizations and searching for a kitten that I bonded with. The first day was a wash, but I woke up the next day with the feeling that that was going to be the day I found my perfect kitty.

I ended up going to an adoption center called No Kill LA and falling HEAD OVER HEELS in love with a kitten named Hudson– not a female cat, but a little baby boy cat. I have always been drawn toward boy babies over girls for some reason, so it sort of made sense. I will spare you all of the details of the day, because it was spontaneous and awesome and monumental and so special, but I will say that it’s a day I will never forget.

Bringing Huddy home was one of the greatest, proudest, most thrilling feelings I have ever felt– combined with tons of terror and anxiety. What if he hates it here?! What if he’s afraid of me forever? What if I am not meant to take care of a kitten and I do something wrong? What if he dehydrates or starves or falls out of a window?!

Needless to say… I was a nervous wreck. And so was he. He hid under my bed for about four hours and I laid under it (as much as I could… he is far tinier than me, lol) and tried to show him his new toys and pet him. He was scared shitless and his little heart was beating ferociously out of his chest. I was SO SCARED and was afraid for a few hot minutes that I’d made a terrible mistake.

Eventually, after a long evening of Huddy running from me, he crawled out from underneath my bed and circled me on the floor. Then he laid down on his back right in front of me and started meowing. He was finally starting to trust me. To say that I teared up from happiness and pride would be a vast understatement… I totally cried and knew that he was beginning to realize this was his home and I was his mama. 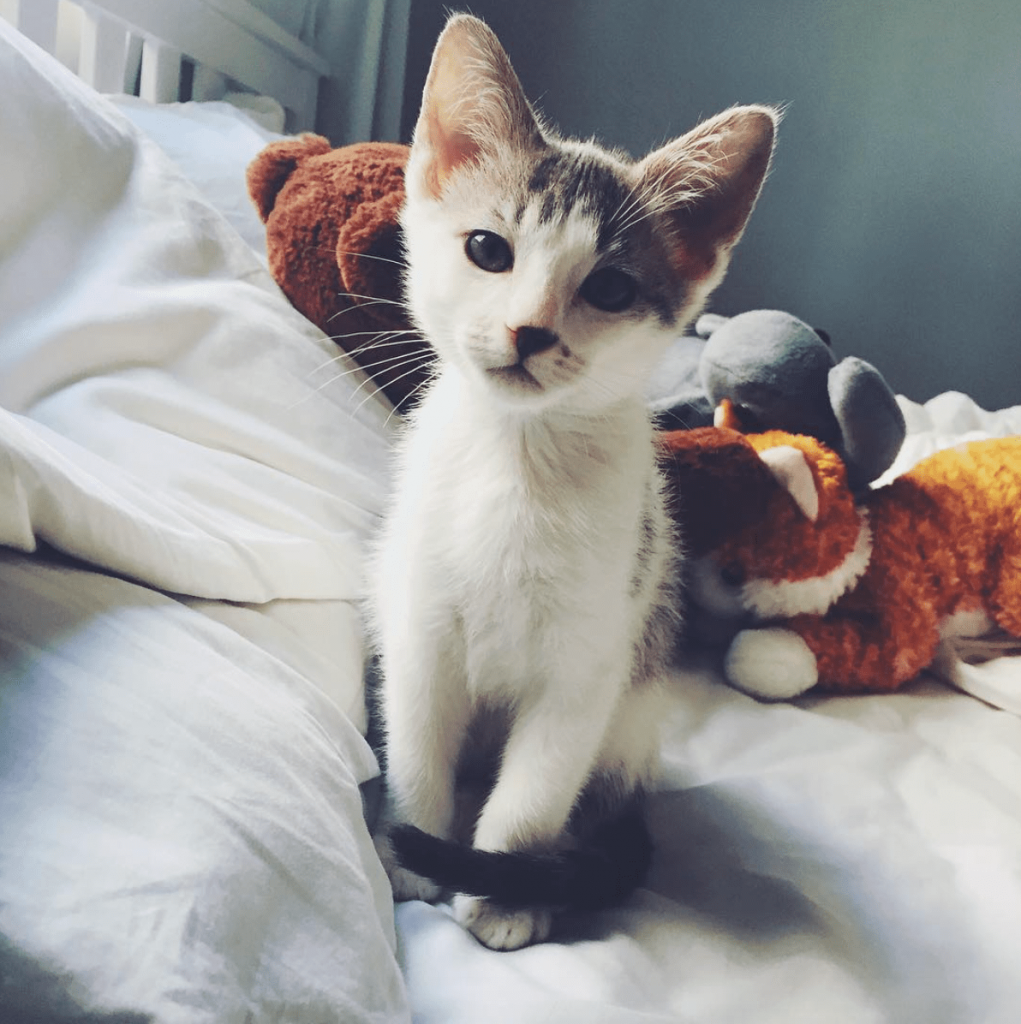 Is this face real life?

I brought him into bed with me that night to cuddle and he fell asleep purring on my chest and rubbing noses with me– and the rest is history!! Now we sleep cuddling and holding hands every night (seriously. It’s perfection), and while my friends and family are ASTOUNDED (and some of them mildly horrified) that I am now a kitten mama, it’s pretty clear to them that I am over the moon with Hudson.

It sounds crazy, but my maternal instinct kicked right in and I went immediately into mama mode. Huddy’s safety and happiness is basically all I care about right now, and I have spent COUNTLESS hours laying on the ground playing with him and staring at him because he is actual perfection. Those of you who know me understand the hilarity of this situation, since I have never been one to stay home for a full day or even sit in one place for several hours.

Even from just reading this blog consistently you know what a workaholic I am!! I run two businesses and several social media accounts and I have a book coming out and a YouTube channel and all sorts of commitments… But Huddy  somehow manages to fit right into my life, and he is my top priority right now. 🙂 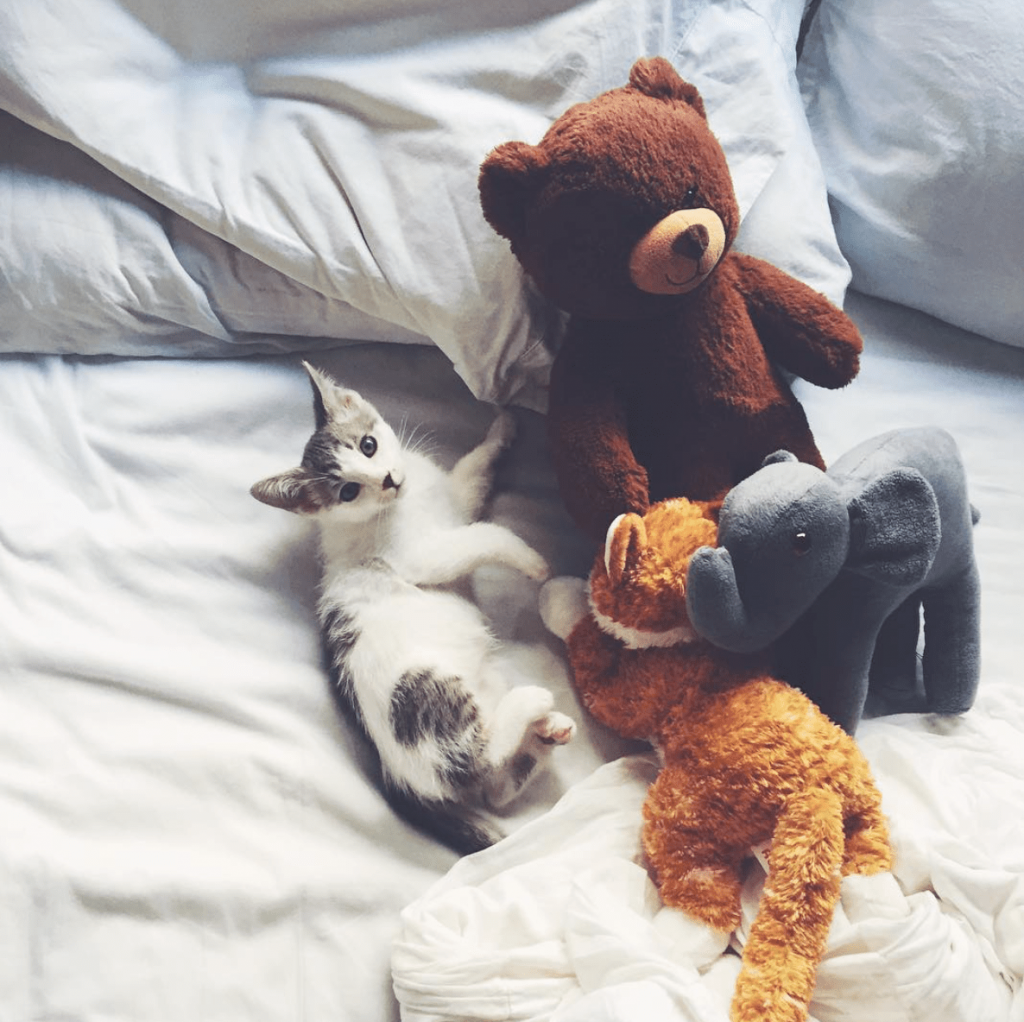 One of the best parts about getting Hudson is that adopting him was 110% my decision. I am the type of person who consults a LOT of people in my life when it comes to just about everything that I do. I have regular daily texting convos with about 10-20 people that I am super close to, and they are a big part of my decision making process and my daily ups and downs. The day that I got Hudson… About ONE person knew that I was doing it, and that’s because she happened to me with me that afternoon. (Hi, Nile!)

I started Snapchatting photos from the adoption center, and all of my friends thought that Nile, the friend I was with, was getting the kitten and not me– that’s how surprising the decision was.

Some of the funniest reactions I got…

Katie & Danielle (my lifelong besties who have known me since I was  very young): “Ok, we have a question for you. Do you actually clean the litter box?? We really can’t picture it. OMG you actually do?! That is shocking!!!!”

Danika (my lovely intern & photographer who took most of the fab photos in this post): [After we spent the day in my apartment with Hudson] “I don’t think I’ve never spent this many hours in one place with you… Ever.”

My dad: “Hate to break it to you, but you’re going to have to take the kitten back. You CANNOT keep him.”

Everyone in my life from my sister to my niece to my friends: “Wait, this is a joke, right? You didn’t ACTUALLY get a kitten?”

And perhaps the best of all, my mom, unsure whether to be supportive and excited or absolutely terrified at the commitment I’d just made: [In response to a photo of Hudson that I sent her the night I adopted him] “Adorable kitten :/”

Now I’m happy to say everyone is supportive & excited for me, and those who have met Huddy know how unbelievably perfect, sweet, mild mannered, cuddly and lovable he is. He is going to be in one VERY loved household from now on– and it’s SO WEIRDDD and wonderful to think that Huddy will be with me for years and be a part of my future kids’ lives. It’s amazing. I love it.

Now we even do yoga together. 😉 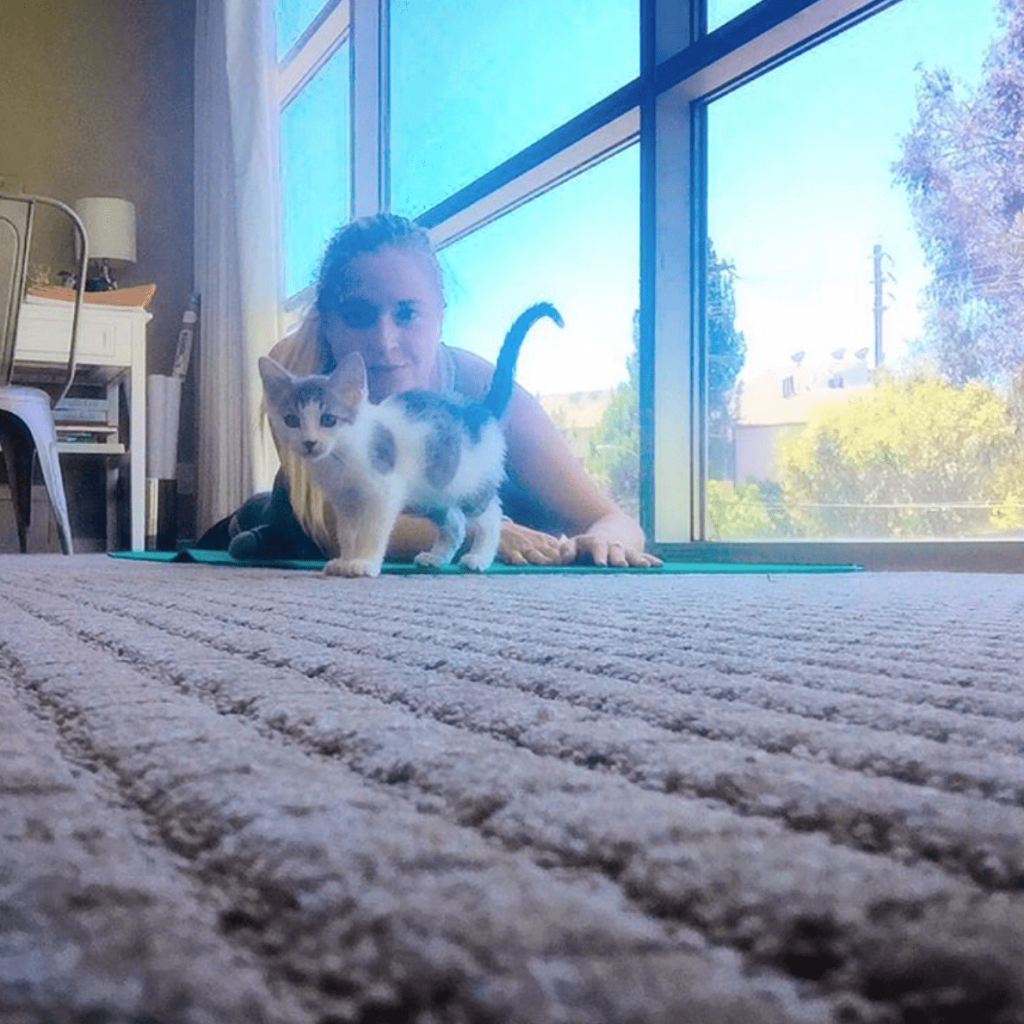 I am open to any and ALLLLLLLLL kitten tips! I am so so so so lucky to have my dear friend Chloe Dove who stayed with Huddy this weekend while I was at a wedding, and has been the kitten whisperer since day 1 with him. Would love to know any toys, tips, tricks, organic/healthy food brands, vet tips, ANYTHING— send it my way!!! Huddy is going to be one spoiled baby. 😉